Like its predecessors Theros Beyond Death has an ancient Greek themed Top-Down design, making use of many mythological tropes (Heroes, Monsters, and Gods).

The set's expansion symbol is a Mask of the Returned. 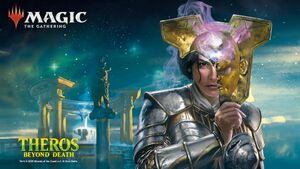 Note that there is no ebook for Theros Beyond Death, nor were there weekly updates for Magic Story.

The set focuses on the Underworld of Theros over the normal world of the plane, with a major plot point being the return of Klothys, the Therosian god of destiny. It features the returned planeswalker Elspeth Tirel and her torturer Ashiok.

The Gods are at war, and they bring their champions to fight. Elspeth breaks free and defeats Heliod with a weapon created from her past traumas. Klothys finds out about Elspeth escaping the underworld so she is sending someone to bring her back to the Underworld or capture her.

The cards that represent the Story Spotlights in Theros Beyond Death are:

The sixteenth card in the boosters is a token, with advertisements on the back side.

Theros Beyond Death introduces the keyword action Escape; spells with escape can be cast from the graveyard for their escape cost. The cost includes exiling a number of other cards from the graveyard. Certain creatures receive an additional bonus as they escape.

Hero of the Nyxborn and Heroes of the Revel effectively have Heroic, without the actual ability word.